How Big a Difference Do Restricted Rents Make?

The rapid rise in rents over the past several years has hit lower-income renters hard. While federal programs, such as the Low-Income Housing Tax Credit (LIHTC) have helped create and preserve some affordable housing units, the need for affordable housing far outstrips the available supply. Residents who moved into properties with subsidized housing just a few years ago have benefitted considerably in recent years, with lower starting rents that have grown modestly. However, during the same period there were many households that qualified for LIHTC-funded rental housing, but no affordable units were available to them. Those households had no alternative than to pay market rents. Looking back, market rate units generally cost modestly more than affordable units in many metros in 2012, but because of differing rent growth trajectories over the past five years, renters in those market rate units now pay significantly more. Rental growth rates for a selection of markets are shown below for both restricted and market rate units.

U.S. Department of Housing and Urban Development (HUD) rules determine how rents are set for units in properties funded with tax credits. The formulaic rent levels are based on federal regulations, which HUD determines by geography, either using Area Median Income (AMI) and inflation, or Fair Market Rents (FMR). The standard calculation for rents at LIHTC properties is based on 60% of the area median income, assuming 30% of income is applied to rent, with an adjustment made for the number of occupants. In other geographies, the fair market rent approach is used. It bases rents on the 40th percentile of two-bedroom (2BR) FMR rents. There is a third approach largely applied outside of metro areas that we do not review here. The fair market rent approach is generally used in areas with high housing costs compared to AMI. The formulas for calculating the rents are complex, see the appendix for details. 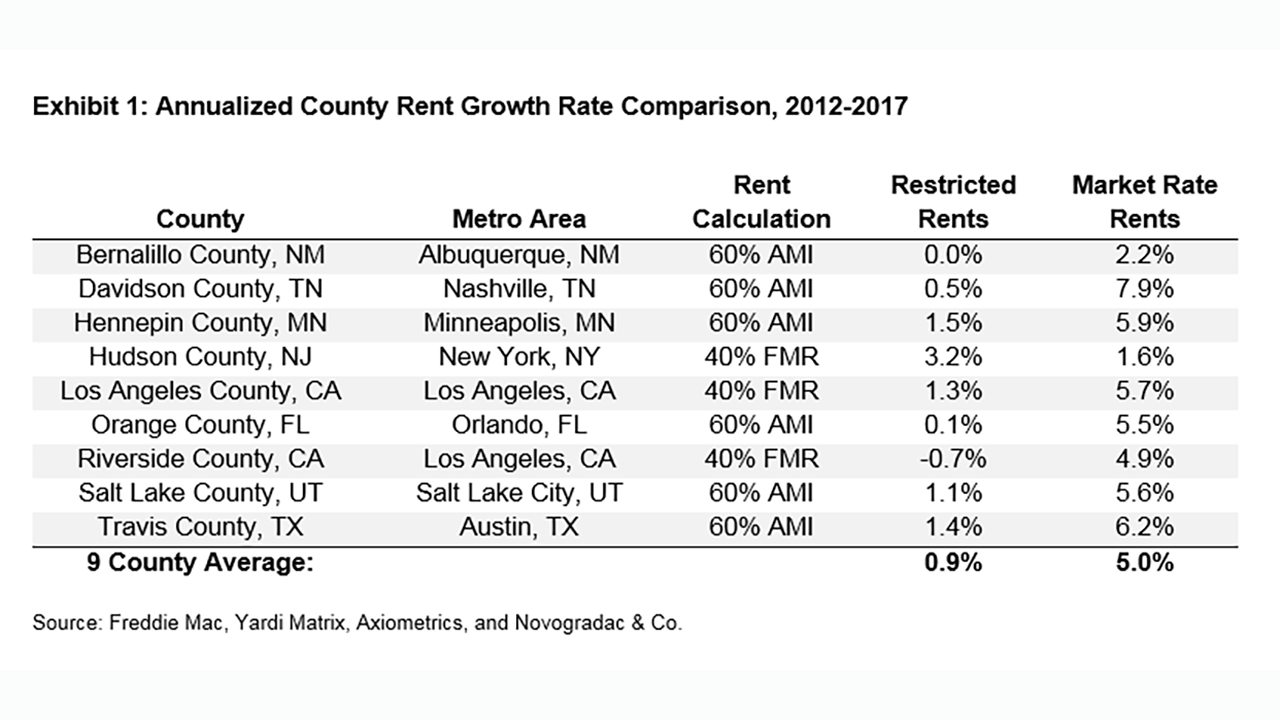 Clearly, rental growth rates in restricted units have been muted relative to the well-documented increase in market rents. Market rate rent increases from 2012 through 2017 ranged from 1.6% to 7.9% annually, averaging 5%. During the same period, restricted rent changes ranged from -0.7% to 3.2% annually, and averaged 0.9% per year. Averaged across all nine of the selected markets in 2017, a tenant in a market rate unit spent $7,500 more per year than a tenant in a similarly sized rent-restricted 2BR unit.

The difference in the rent levels and growth rates is because market rents are determined by supply and demand on a local level, and restricted rents are determined by a formula tied to income growth and inflation. Because those two drivers of restricted rents have both grown more quickly in recent years, the formula-driven rents will grow faster over the next two years in these LIHTC properties than the previous five. Note that the restricted rents we analyze here are not the same as for those who have Section 8 vouchers, that is a separate program where renters who qualify pay 30% of their income toward rent, and the remaining rent is subsidized.

Our analysis indicates that formula-driven rents have the potential to rise sharply over the next couple of years. For 2018 and 2019 we projected 60% AMI rents in 44 markets, in 40 of those markets rent growth is expected to average 4% or more per year, with nine of those markets projected to grow 7% annually, the maximum allowable under HUD regulations. However, given the recent history presented in Exhibit 1, renters in restricted units continue to be much better off than those in market rate units.

Property operators will have the ability to increase rents significantly based on the formula. In many markets restricted rents have been lagging market rate rents in recent years, and there is significant unmet demand for units with restricted rents. In addition, operating expenses for the properties have been increasing. Nevertheless, there are many on-the-ground considerations and our results do not necessarily mean it will make sense for all properties to increase rent the full allowable amount. Property managers need to consider if occupancy at the property could be affected, and take into account costs associated with unit turnover. Nonetheless, given the formulaic result and tight market conditions, we expect rent increases in the near future.

To assess the difference in affordability between rents that are restricted and those that move with the local area market, we reviewed rent trends since 2012. During this period, the number of renter households nationally increased by more than 3.5 million, with renter demand outpacing available supply, resulting in several years of very strong market rate rent growth. We selected nine markets to analyze, as shown in Exhibit 1. We chose a variety of different sized markets in varying geographies to study. Average market rate rents were compared against restricted rents for 2BR units in those markets.

We examined four of the nine metro areas in depth; one of each market size, and one with drastically different market conditions from the others. Our analysis follows. Charts show data at the county level for each area analyzed.

Los Angeles: Large Market
Los Angeles had very robust market rate rent growth from 2012 to 2017, averaging 5.7% annually according to Yardi Matrix. During the same time, restricted rents increased a more modest 1.3% per year, as shown in Exhibit 2. Because HUD calculates rents in this market using the fair market rent method, we are unable to project a rent change for 2018.

The recession was late to hit the restricted rents in Los Angeles, with restricted rent decreases in 2012, 2013, and 2014, while market rate rent growth was strong, averaging 3.3% annually during the same three years. 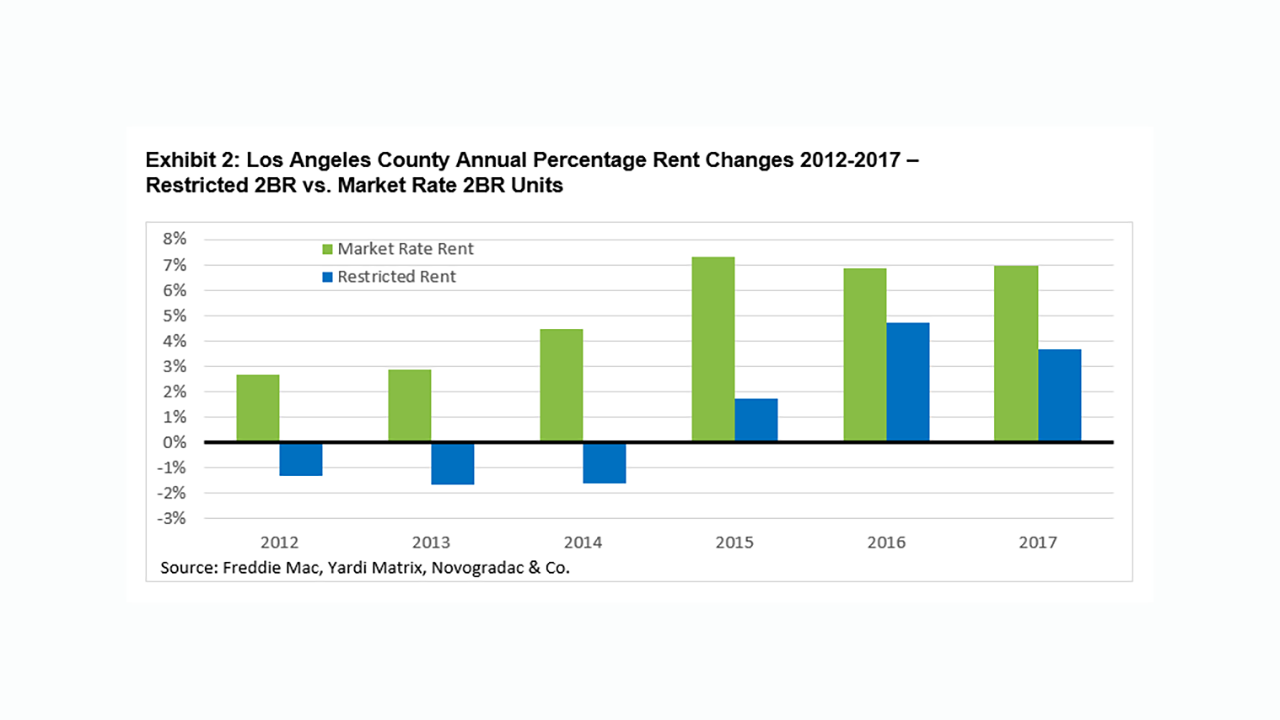 Market rate rents are significantly higher than restricted 2BR rents. In 2012, the monthly rent difference was more than $850; by 2017 the monthly difference had swelled to more than $1,400 a month, or roughly $17,000 annually, as shown in Exhibit 3. Median renter household income in the Los Angeles metro area is $41,666 per year and households earning that income in LA in market rate units would be paying 76% of their income per year on housing. Renters in restricted units are better off, they would be paying 35% of their income to rent. 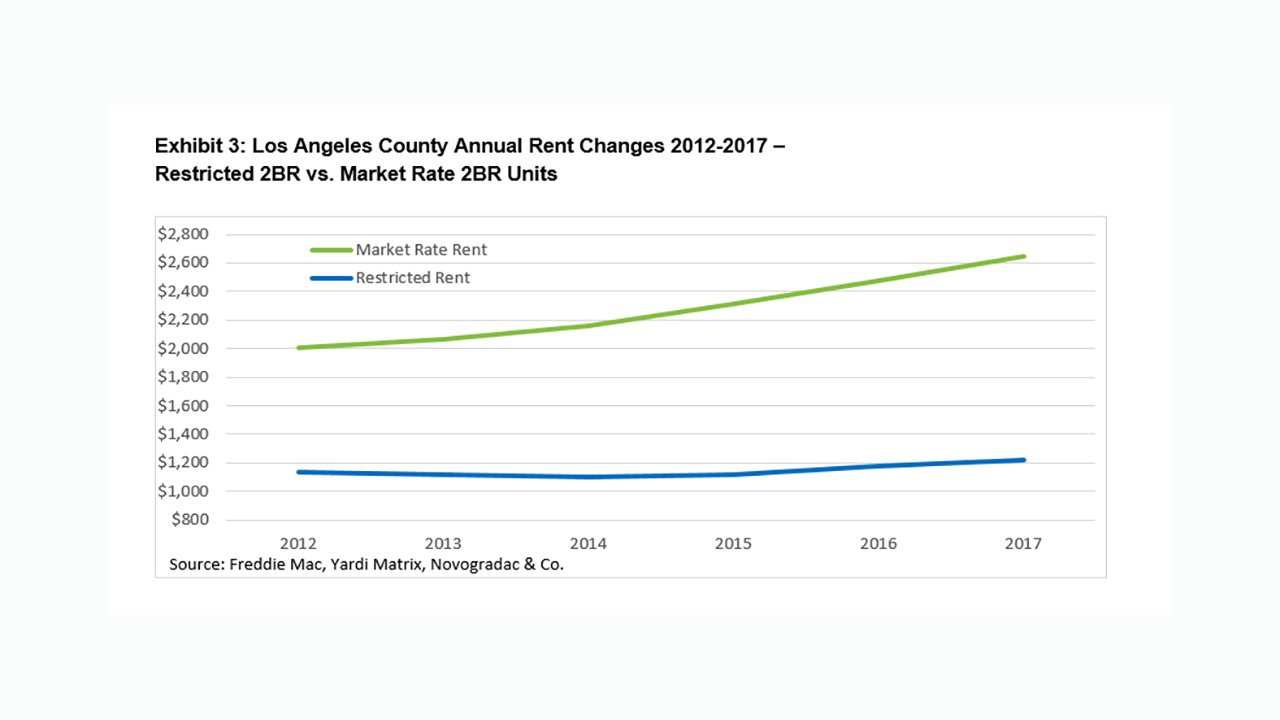 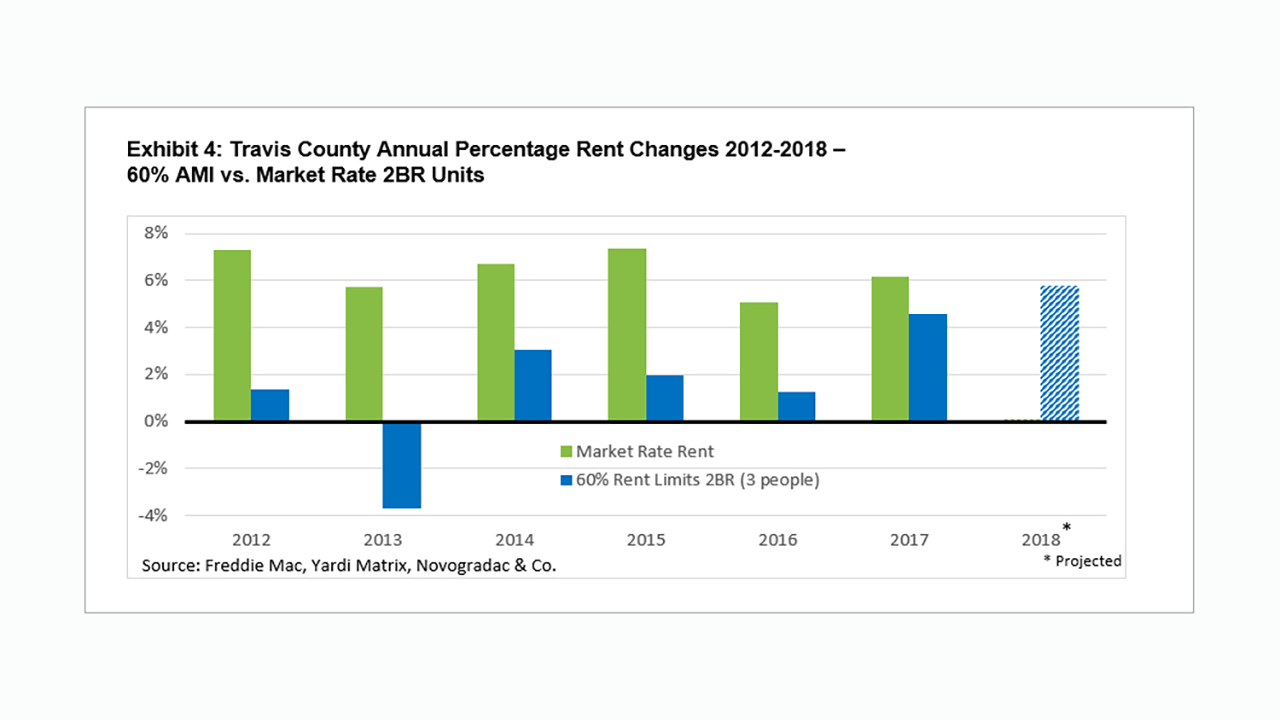 Market rate rents increased from $1,087 per unit in 2012 to $1,468 in 2017 according to data from Yardi Matrix. During the same period, 60% AMI rents went up modestly from $1,026 to $1,099 per unit. In just five years, the spread between market rate and restricted rents widened from $50 per month to more than $350 per month, more than $4,000 annually as shown in Exhibit 5. Median renter household income in the Austin metro area is $45,233 per year. Annual rent is $13,188 in regulated units and $17,616 in the average market rate rental. The renter making the median income in the unit with restricted rents is paying 29% of income to rents, while the renter in the market rate unit is paying 40% of income toward rent. 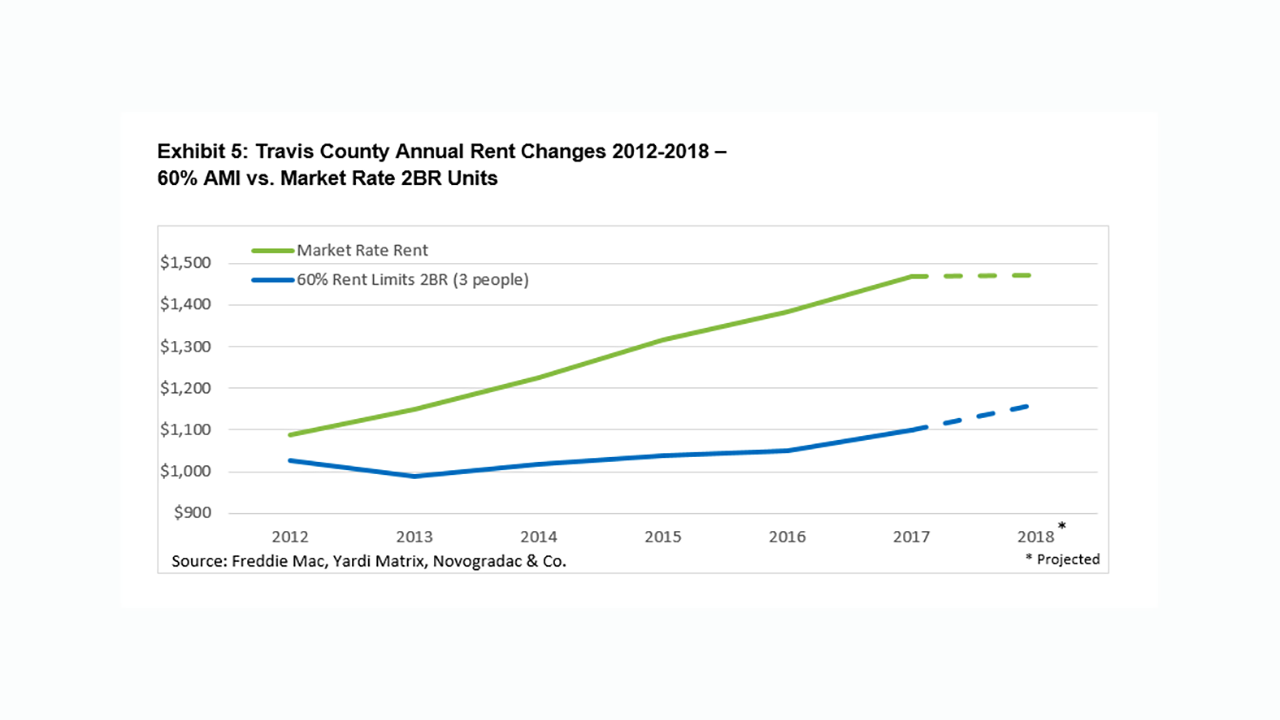 Salt Lake City: Small Market
Rents in Salt Lake County follow a trend similar to those in Austin, with 60% AMI rents decreasing in 2013 and 2014, while market rates grew 7% to 8% annually according to data from Axiometrics. Market rate rent growth slowed in 2015 before rebounding in 2016 and 2017; during those years, 60% AMI rents grew 2% to 5% annually, as shown in Exhibit 6. Projected rent increases in 2018 are substantial for market rate and 60% AMI. Both are expected to grow between 6% and 7% for the year.

In 2012, 60% AMI rents were permitted to be higher than market rate rents. This did not last long, as shown in Exhibit 7. By the following year, they were essentially equal and, since then, market rate rent growth has outpaced 60% AMI rent growth. In 2017, 60% AMI rent was $1,018 per month, while the average market rate unit was $1,138 monthly, an annual difference of more than $1,400. Median renter household income in the Salt Lake City metro area is $40,372 per year. Households that earn that amount would be paying 36% of their income to housing in market rate units and 32% of income in units with restricted rents. 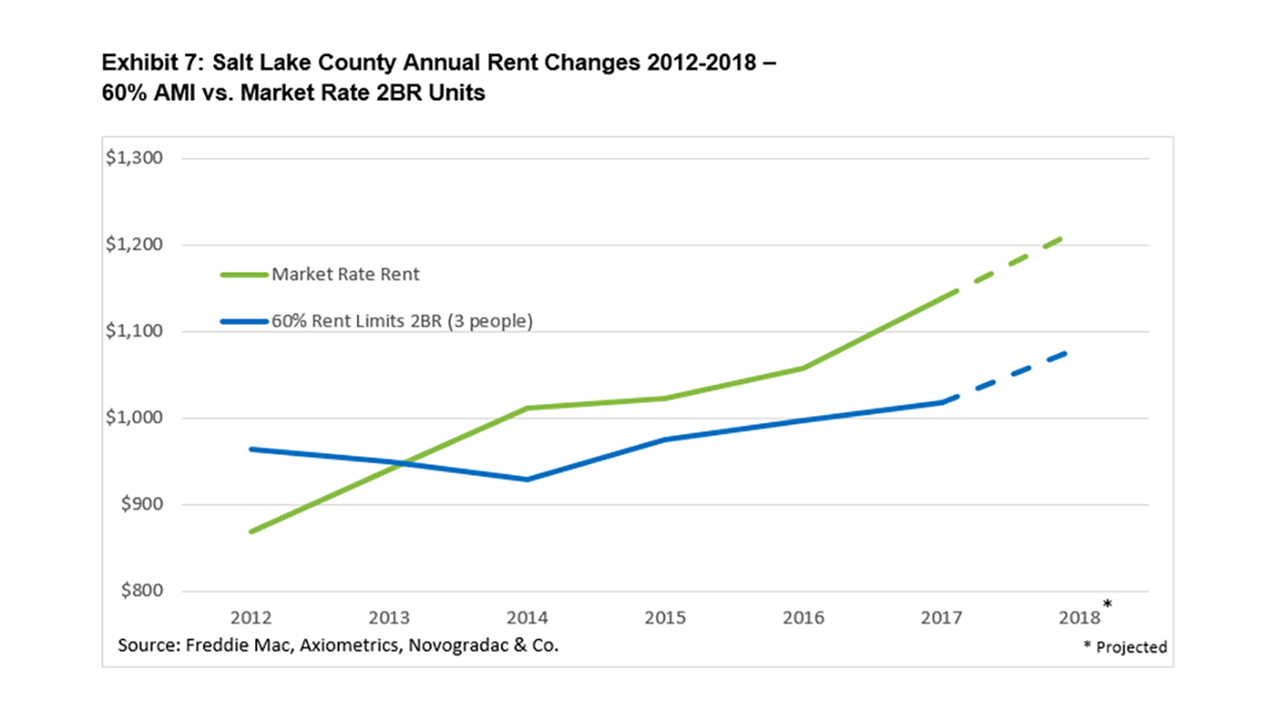 As shown in Exhibit 9, restricted rent was almost $1,800 per month less than market rate rents in 2012. In 2017, the restricted rent rate was $1,161 per month, while the average market rate unit was $3,019, an annual difference of more than $22,000. Median renter household income in the New York metro area outside of the five boroughs is $40,230 per year, which means that the median income renter would be paying 90% of their income towards rent in the average market rate unit, while the same household in the restricted unit would be putting 35% of their income towards rent. 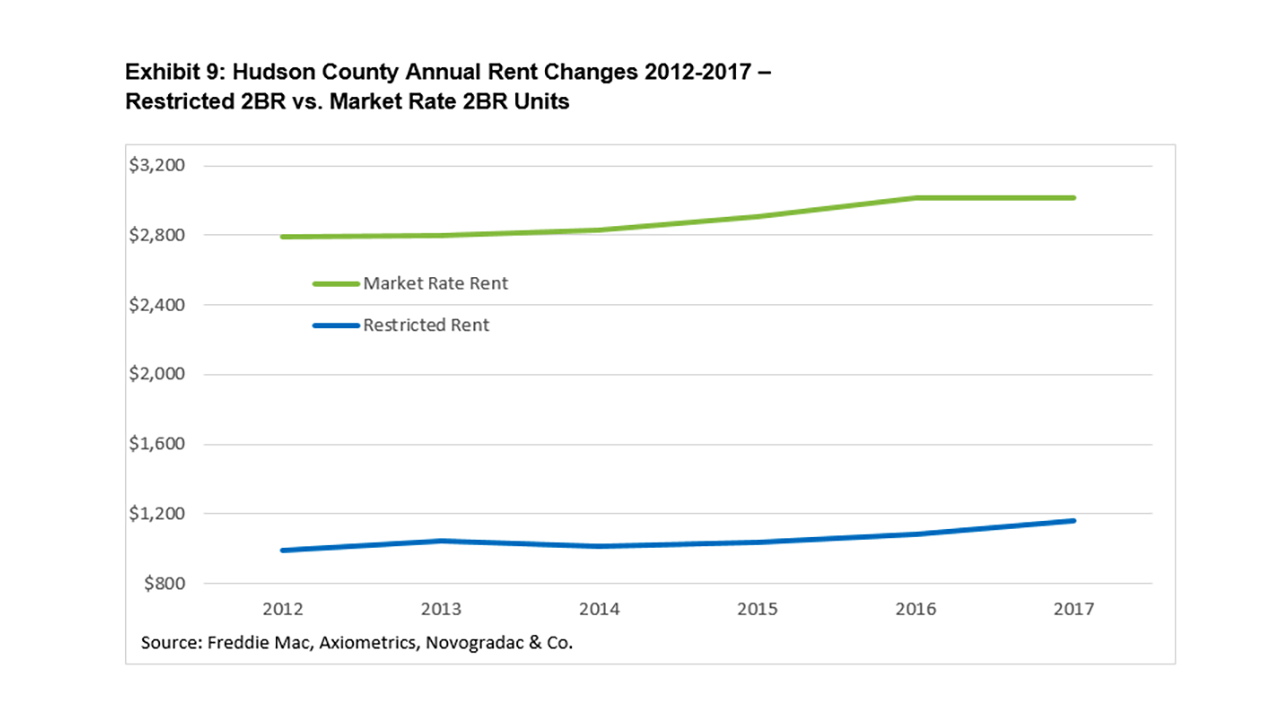 Renters in units with restricted rents enjoy significant benefits over their counterparts in market rate housing, many of whom qualify for restricted rents but due to the lack of available supply are unable to benefit. The first and most obvious benefit is lower monthly rent. In 2017 the average restricted rent payment was 38% lower than the average market-rate rent in the markets analyzed. Another advantage is more stable and predictable rent growth. Since 2012, market-rate rents in the surveyed markets grew markedly, averaging 5% per year, with annual rent spikes of more than 7% in seven of the markets. In contrast, restricted rents grew an average of 0.9% annually, with the greatest annual rent spike less than 5.5%. Averaged across all nine of the surveyed markets in 2017, a renter in a market-rate unit spent $7,500 more per year in rent than a renter in a similarly sized 2BR LIHTC unit. In high-cost areas, such as Hudson County, New Jersey, the difference was even greater, totaling more than $22,000 in annual rent savings in a restricted unit. The rent burden is meaningfully different between the two types of units.

For those households that qualified for, but were unable to move into rent restricted housing, the substantial market-rate rent increases since 2012 are causing serious financial hardship. While renters in restricted units are generally paying much lower rents, they should expect to see rent increases in the coming couple of years, given what we know about the formulaic rent drivers.

2018-2019 Projected Rent Changes
We projected 60% AMI allowable rent growth for 44 metro areas where rents are based on AMI level.

As discussed above, restricted rents which have grown very modestly for the past five years, will have the potential to increase at a faster rate over the next couple of years, based on HUD-based rules on allowable rents in these units. Renters in these units will still be much better off than if they had been in market rate units.

2014-2018 Rent Calculation Example
To explain the 60% AMI calculations from year to year, we used Hennepin County, Minnesota, which includes the city of Minneapolis, as an example. As shown in the following table, the previous year’s rent is multiplied by the percentage by which median income changed, then multiplied by the difference in Consumer Price Index for the following year. Stated another way:

How HUD-determined 60% AMI Rents Are Calculated
All 60% AMI rents are based on 50% AMI (very low income, according to HUD) multiplied by 1.2. The 60% AMI rents shown in the tables and graphs below are based on 2BR units with three residents. The standard calculation for 2BR, 60% AMI rent:

Note: All restricted rents from 2012 to 2017 are sourced from Novogradac & Company, a leader in the tax-credit housing field.

Also note: Los Angeles and Riverside counties in California and Hudson County in New Jersey are considered high-cost areas by HUD; therefore, the restricted rent is calculated differently than for other markets. They are based on the HUD Fair Market Rent for a 40th percentile 2BR unit. HUD rules dictate If the calculation based on 40th percentile 2BR FMR yields a higher result than the 60% AMI calculation above, then rents are calculated using the 40th Percentile 2BR FMR formula below. HUD uses the steps below to determine restricted rents in high-cost markets:

The current trajectory indicates the multifamily industry is on track for a healthy 2023, although it may be a stronger second half compared with the first half.